Landing It: My Life On and Off The Ice by Scott Hamilton with Lorenzo Benet


There was a moment after winning the gold medal in Sarajevo when time seemed to stand still. I was back stage at the Zetra, a few minutes before the medal ceremony, accepting congratulatory handshakes and hugs. There was a TV camera in my face and skating officials, television crews and competitors milling around. It was a strange sensation, almost dream-like. Other medalists will know what I mean: something big has happened to you but you just don't know how big or what it all means. People are around yet you're alone in a state of euphoria. That's when Doug Wilson, the ABC sports director, came over and shook my hand. "Your life has changed forever," he said."Aw c'mon," I said modestly. I figured Doug was just being polite."No," Doug replied, shaking his head. "You'll see." His tone was very serious, now. "When you get home your life will be completely different. Where you were three weeks ago and where you are today? Three weeks ago doesn't exist anymore. Your life is brand new."

I didn't believe him at first, and actually forgot about it until much later. It's real hard to pay attention to anything that's said to you the first 10 minutes after winning any competition because that's the best part of the whole week. After days of draining practices and three pressure-packed events, everything you have worked for is finally realized and smashes into you like a giant snowball. At the Olympics it was more like getting hit by an avalanche. It would be some time before Doug's words would register.

Nothing seemed out of the ordinary for the remainder of the week. I stayed in Sarajevo, except my conversation with President Ronald Reagan. “The president has been trying to get a hold of you all day,” a USOC public relations man said. “Come with me.” We went to the Communications office in the Olympic Village and they got President Reagan on the line immediately. I didn’t believe it, not until I actually heard his voice. He sounded just like he did on television. After he congratulated me I was completely tongue-tied and froze for a second. All I could think of doing was thanking him and then we hung up. I felt like such a fool at being at a loss for words.

I stayed in Sarajevo and had a celebration party at the Holiday Inn with Don, my father, Sam, Helen, Ricky and other skating friends. I later watched Katarina Witt edge Rosalynn Sumners for the gold medal in the ladies' event. Jayne Torvill and Christopher Dean's made history when their free dance to "Bolero" won them a string of perfect 6.0 artistic marks from all nine judges. Kitty and I spent some time together during the rest of the games. We were all on a natural high and enjoyed taking in some events hanging out in the village. Although I had worlds to compete in Kitty and Peter were all through with amateur skating. They decided that winning the silver medal was the best way to go out, and I couldn’t argue with that.

On the final day of the games, I marched in closing ceremonies and then flew home with Don in first class. It was a great ride back to the United States. I slept part of the way and posed for pictures with passengers and flight attendants. People kept asking to see my medal and I kept showing it. I had never seen a gold medal myself until I won one, so I could feel a little bit of that awe.

But what I remember gaining most from the experience was that the process was much greater than the result. And I still feel that way. I don't mean to downplay an Olympic gold medal, but it would be meaningless without the years of preparation, setbacks, comebacks and successes. The camaraderie, the rivalries, the discipline, and the people who gave me so much -- from Rita Lowery to Mary Scotvold, from Carlo to Don and Ricky, and so many others -- all of that was more satisfying over time than any medal. What I accomplished working toward that end had more meaning than the end itself. Since there will be a thousand national champions, a thousand world champions and hundreds of Olympic champions, what you have that will always be yours is the process. That was the personal experience Janet Lynn was referring to when I met her on my first practice in Wagon Wheel back in 1972. That experience and what you gain from it is yours forever.

When we landed in Chicago, Don and I went our separate ways. I was spending the night in Chicago with some of my pals. He went to make his connection to Denver and I ventured to baggage claim. I thanked him and told him I'd be seeing him in a couple of days. He gave me one of those looks – have a good time but don’t forget, we still have a world championships coming up.

It took some time reaching my bags. Walking through the airport, people were nodding at me and saying hello. A couple with young children stopped and asked for my autograph. When I got to baggage claim, I spotted Brent across the room, waved at him and started moving in his direction. Then I heard a young voice call out my name. Then another and another. I had run smack into 200 Chicago kids on their way to Washington D.C. for a school field trip. They crowded around me and I spent the next hour signing autographs. This had never happened to me before outside of an ice rink. I had been signing autographs at competitions for four years, ever since making the '80 Olympic team. However in public, I could usually go about my business without being recognized.

Just a few weeks earlier, I had walked through this very same airport while making my connection to Paris. I was running around looking for the time and began asking strangers for help. People walked right past me without saying a word. I literally could not get the time of day. I was so embarrassed I started to laugh. I might as well have been trying to sell religious materials. Now as I signed the last piece of paper, I remembered Doug's prescient words in Sarajevo. Now I'm beginning to see what he was talking about, I thought.

Later, Brent and I went to the Park Hyatt hotel to hook up with Mahlon Bradley, who had finished up at Harvard and was in medical school at Northwestern. We were going to go out and have a night on the town. Brent and I walked into this swank lounge and sat down at a fancy oak bar. There was classical music playing and all the men were wearing ties and jackets and the waiters were in white. Brent and I were dressed very casual -- jeans, golf shirts and tennis shoes. “What’s this, some kind of law library?” Brent said. We were surrounded by all these business people dressed to the hilt, and we were getting dirty looks. Though I was feeling a little uncomfortable, I wasn't going to let it bother me. I had been on the straight and narrow for six months -- not a drop of alcohol -- and was ready to let loose and have a good time.

Out of the corner of my eye, I saw the maitre d' approaching. "Uh-oh," I thought. "Are we getting tossed out for violating the dress code?"
"Excuse me, gentlemen," the maitre d' said. "We would like to buy you a drink."
That got everybody's attention. The eavesdropping suits expecting us to get the heave ho were scratching their heads now, wondering what the heck was going on. I thanked him and said, "A couple of beers would be fine. I'll have a Coors. Brent, what do you want?"

The maitre d' interrupted. "No,no,no," he said. Then like a scene from a vintage 1940s movie, he clapped his hands and a waiter appeared. "A bottle of Dom Perignon, gentlemen. Compliments of the house." 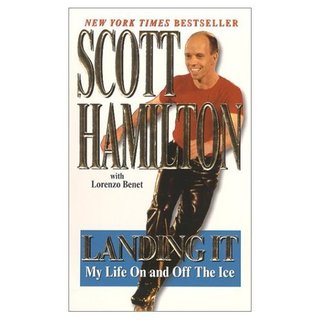